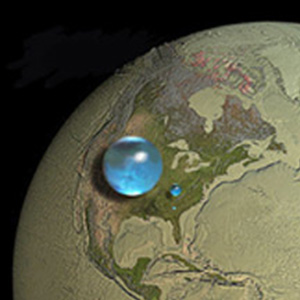 Picture in your mind a 1-gallon milk jug. Got it?

Now imagine 12 of them lined up on a table. That’s how much water the average American is carrying inside their body. 12 gallons. That’s a lot of water!

Every day we’re exhaling water vapor, sweating or excreting water, and if we don’t drink water or eat watery foods to replenish it, in as few as 3 days we’d be dead.

Water is very much a life or death issue to all humans and all living creatures. But for the most part, we take it for granted. Often when that happens, it’s because we have an abundance of something.

But do we? Sure, we live on the Blue Planet. Look at a photo taken from space and it’s easy to see that 70 percent of Earth is covered in water.

Take a closer look, though, and you’ll see that number is misleading. Water, even groundwater, is really just on the surface of Earth. Oceans may seem deep to us, but they’re incredibly shallow, just a sliver-thin veneer compared to the massive diameter of Earth.

As a matter of fact, all the water on the entire planet would fit into a sphere the width of Texas. And the fresh water that we depend on is less than 1 percent of that.

Fresh water is indeed a precious resource—and a topic you’ll hear a lot more about, on EarthDate.

Synopsis: All of the water on our planet is a very small volume compared to the size of Earth. Only a tiny fraction of that is fresh water.

References
How much water is there on, in, and above the Earth? | USGS
Water Basics | USGS
Water | Wiki
Water Resources | GreenFacts
Contributors
Juli Hennings
Harry Lynch