How would medical researchers build the perfect needle, for sensitive injections or brain-tissue sampling? Of course, they’d look to nature.

And where in nature would they find the perfect needle? On the sharp end of a mosquito!

Mosquitoes are the most dangerous creatures on Earth, carrying diseases that infect 700 million people a year and kill 2 million.

This is because, for millions of years, they’ve been so good at sticking their beaks into us.

They do this with a special six-part proboscis:

There’s a pair of maxillae, tiny serrated blades that vibrate to quickly saw into the tissue. A pair of mandibles holds the tissue apart as the maxillae cut, so they can continue deeper.

A tubelike hypopharynx injects saliva, which contains a numbing agent, an anticoagulant, and a blood-vessel dilator. And a V-shaped labrum draws up the blood.

Scientists analyzed these parts, then set out to copy them.

They built tiny saw blades of glass crystals and vibrated them with a piezo motor, like in a wristwatch. Two tiny needles held the puncture apart, while a third, ultrafine needle made the injection or drew the sample.

These are lubricated with a topical anesthetic and constructed to be flexible like a mosquito’s proboscis, which reduces the pressure at the puncture site by 30 percent.

The result is a completely painless microneedle for the most sensitive uses—a comforting gift from that most bothersome insect.

Synopsis: The hypodermic needle hasn’t evolved much since the first successful injection by Francis Rynd in 1844, and despite improvements to hollow needles over time, the jab is usually painful. To avoid detection and death, the mosquito has evolved its jab over millions of years to the point that it is painless by developing a complex system of six “needles.” Scientists are using biomimicry to lessen the pain of injections by imitating the stealthy bite of the mosquito. 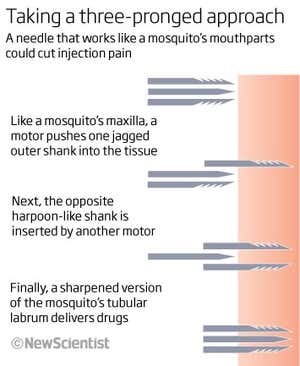