Life on a Giant Magnet 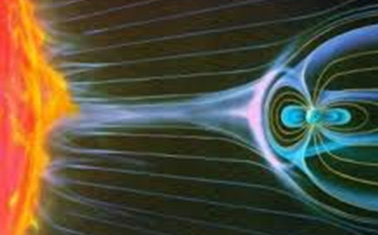 Compasses point north, by following Earth’s magnetic field. It’s amazing when you think about it—there’s an invisible force, flowing out of Earth’s South Pole and diving back into its north pole, pulling all compass needles to the north with it.

Even more amazing is that the magnetic field is keeping us alive right now. Without it, there would be no life on Earth. We’re talking Mars.

Here’s how it works: Our magnetic field is generated in Earth’s core. It flows outward through the crust and surrounds Earth like a giant bubble, called the magnetosphere, which extends more than 400,000 miles into space. But on the side that faces the sun, solar winds squash it down to just 40,000 miles.

It’s the force of that magnetic field, pushing back against the solar winds, that keeps them from scouring away Earth’s atmosphere.

Scientists even think that, billions of years ago when Earth was forming, our magnetic field helped trap the gases that made up our atmosphere in the first place.

By contrast, when a planet loses its magnetic field, its atmosphere declines with it, like we see on Mars.

So the next time you see a compass, take a moment to remind yourself that our lives are made possible because we’re living on a giant magnet.

Synopsis: Our resilient magnetosphere safeguards the atmosphere, life on Earth, satellites, and spacecraft from solar and cosmic radiation.