The Earth has 3 million earthquakes a year, 8,000 every day. And some are caused by humans.

The crust of the Earth is composed of many tectonic plates, which are always moving.

As the plate boundaries collide, grind against, or pull apart from each other, the crust cracks, creating fault zones.

As stress builds up, the plate boundary faults can open or slide, causing natural earthquakes. The vast majority are too small to feel, but some can be major.

Sometimes human activities can trigger an earthquake, causing a fault to move earlier than it naturally would. In 2017, some British scientists decided to catalogue these.

They found that about half were due to extraction—of mining products, groundwater, or oil. Removal of material changes the stress, which can cause faults to move.

Another quarter were caused by loading the Earth’s surface where it was not loaded before, such as reservoirs held behind dams, which can add stress to faults.

The last quarter happen when fluids produced from the Earth are injected back into it, like in a disposal well, where wastewater from oil or gas production changes the pressure conditions, sometimes causing the fault to slip.

This last type gets a lot of attention these days, and we’re studying it extensively at the Bureau of Economic Geology, where I work.

Ever since humans have had large-scale industrial processes we’ve been interacting with Earth’s natural earthquake cycle … in ways we’re just now coming to understand.

Synopsis: Earthquakes are powerful releases of energy beneath Earth’s surface. But did you know that human activities also have the power to cause earthquakes? 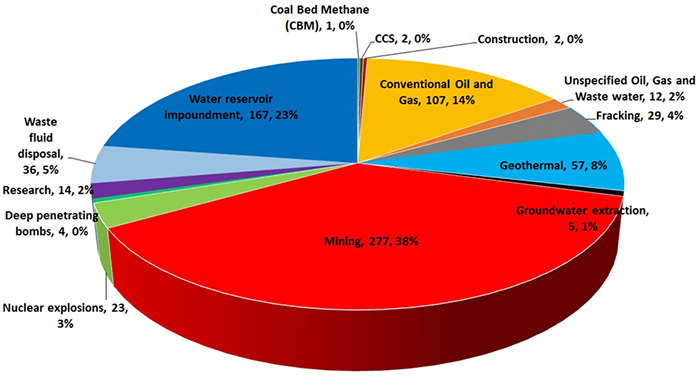